So this past week I entered my very first writing contest. A fellow ANWA member was having a short story contest because May was Short Story Month. I decided to go and give it a try. What can it hurt?

Well, writing a short story is actually very difficult. I mean, you think 1,000 words...no big deal. Anyone can write 1,000 words. It was SO hard. At the beginning I just had a hard time coming up with an idea. It needed a strong but short story line and it had to have a twist at the end. Hmmm...I thought about it for over a week. Then, in the middle of Sunday School it hit me! I started scribbling down my ideas (which I'm sure my teacher thought I was taking wonderful notes that day).

I came home and wrote my first draft. It ended up being 1,600 + words. Man! So I had to go and whittle it down to practically nothing-- just the bare minimum. It was actually a great exercise for me to learn how to describe as much as I can in very little words. I had to pick my words wisely and focus on the most important things. I finally got my story down to 999 words. So I added a word, just because I could (1,000 words was the cut off mark). :)

Anyway, I'll find out what happened to it in a couple of weeks. I'm not really planning on winning, but after she posts the winners on her blog, I'll post my story here...for all the world to see. Yikes!
Posted by AZ SMITHS at 10:21 PM 1 comment:

Illuminations of the Heart Review

Illuminations of the Heart by Joyce DiPastena
My Rating: 5 stars

Synopsis
"Clothilde." He spoke the name on a breath like a prayer. Then he lowered his head and kissed her.

Her heart is lost in that first embrace, her world is shaken to its foundations. There is just one problem; her name is not Clothilde. It is Siriol de Calendri. Trained in the art of illumination in the far-off city of Venice, Siri is directed by her late brother's will to the county of Poitou in France, where she enters the guardianship of her brother's friend Sir Triston de Brielle. Once in Poitou, Siri hopes to find employment in an illuminator's shop - until Triston unexpectedly snatches her heart away with a kiss.

Triston is a man of quiet honor and courage, but the guild he carries for the death of his late wife, Clothilde, has left him numb and hesitant to love again. Worse yet, Siri bears an uncanny resemblance to his lost love. Or does she? Her merry laughter and twinkling eyes are very different from his late wife's shy smiles and quiet ways. Yet when he gazes into Siri's face, all he sees is Clothilde.

Then Triston's past returns to threaten them both. Will his tragic life with Clothilde be repeated with Siri? Trapped between the rivalry of the king's sons on the one hand and a neighbor out for vengeance on the other, Triston realizes it would be safer to send Siri away. But how can he bear to lose her again?
My Review
﻿Joyce does it again. From the first chapter this book hooks you. You've got it all, action, romance, danger, intrigue, revenge and adventure. Just when you think your characters are safe, something else happens to throw them in disarray. This book was a fun ride and Joyce really knows how to write sweet romance. This book has kisses that sizzle, but don't make you blush while reading. I love not having to worry about being caught off guard with inappropriate things. I can always trust Joyce to keep it nice and clean. Then I can just throw myself into the story. Thanks Joyce for a great read!
Posted by AZ SMITHS at 10:11 PM 1 comment:

The Stranger She Married!

The Stranger She Married by Donna Hatch
My Rating: 5 stars

Synopsis
When her parents and only brother die within weeks of each other, Alicia and her younger sister are left in the hands of an uncle who has brought them all to financial and social ruin. Desperate to save her family from debtor's prison, Alicia vows to marry the first wealthy man to propose. She meets the dashing Lord Amesbury, and her heart whispers that this is the man she is destined to love, but his tainted past may forever stand in their way. Her choices in potential husbands narrow to either a scarred cripple with the heart of a poet, or a handsome rake with a deadly secret.

Cole Amesbury is tormented by his own ghosts, and believes he is beyond redemption, yet he cannot deny his attraction for the girl whose genuine goodness touches the heart he'd thought long dead. He fears the scars in his soul cut so deeply that he may never be able to offer Alicia a love that is true.

When yet another bizarre mishap threatens her life, Alicia suspects the seemingly unrelated accidents that have plagued her loved ones are actually a killer's attempt to exterminate every member of her family. Despite the threat looming over her, learning to love the stranger she married may pose the greatest danger to her heart.﻿
My Review
I love regency and I love a clean romance. Ahhhhhh. So it's only natural to say that I really love Donna Hatch's writing. She has a way of making the words flow while painting the perfect picture. When I read her books, I get so into the story. I feel like I'm watching a movie in my mind and I get swept away on a fantastic ride. She always has some sort of twist in her stories which makes it a lot of fun.
I actually read the second book in The Rogue Hearts﻿ series first (which I loved), so I was already acquainted with the characters a bit. I ate up this story. The characters were so real and the whole story just came to life. It's a bit steamy in parts, but nothing that crossed my conservative boundaries. It might have bothered me that Cole was trying to woo (is that the right word) Alicia, except that I had some suspicions that made it okay for me. How is that for cryptic? I'm trying to write a review without adding spoilers. It's very difficult. Let's just say that I loved it and it made me want to read the second book in The Rogue Hearts series, The Guise of a Gentleman, again. And then it made me hungry for more...next book Donna?
Posted by AZ SMITHS at 10:01 PM 1 comment:

Email ThisBlogThis!Share to TwitterShare to FacebookShare to Pinterest
Labels: Regency

The Upside of Down Review

The Upside of Down by Rebecca Talley
My Rating: 3.5 stars
﻿

Back Cover Blurb
"Hmmm," the doctor muttered.
Natalie wrinkled her forehead, almost afraid to ask, and said, "What does that mean?"
"You do know you're pregnant, right?"
Her breath caught in her throat. "Excuse me?"
"You're pregnant."
Her heartbeat thundered in her ears. "I'm what?"

Natalie Drake certainly has her hands full raising a large family, dealing with her difficult mother, and maintaining a relationship with her rebellious teenager. Just when things seem to be going smoothly, she finds out another unexpected surprise--she's going to have a baby. Faced with so many challenges, Natalie must learn to trust in a plan that isn't what she imagined and discover that every situation has an upside.

Beloved author Rebecca Talley carefully creates this touching and heartfelt story that is sure to inspire you. With true-to-life characters and situations, The Upside of Down will reignite your faith and remind you of the importance of family.
My Review
﻿
Warning: This may contain spoilers...sorry.
This book was written for an LDS audience. Reading this book was very surreal for me. Just like the main character, Natalie, I am an only child with six kids. I really could relate to all of the crazy things that would happen, the snide comments from others about having a large family and feeling overwhelmed with just daily life. In fact, it kind of made me feel good--that maybe I'm not alone. Natalie was kind of a stress case and I think I handled the situations differently than her. I'm a little more easy going.
A couple of years ago, I had to go through the experience of having my child diagnosed with Autism. So even though it wasn't the same disability as in the book, I could understand some of Natalie's feelings. Even now, I have to deal with others not accepting my daughter or the fact that she is quirky, odd and doesn't fit in. Even more...I had another daughter that had a fever at 3 weeks old and I had to take her to the ER. I blubbered the entire time they were doing her tests, including the spinal tap. She ended up having a urinary tract infection just like in the book, although we had to stay in the hospital instead of taking her home. Maybe I didn't pray enough (just kidding).
Anyway, it was crazy how much Natalie's life experience was like mine. We had the poopy finger painting and the haircutting. I'm sure my parents could relate when I, like Andrea in the book (don't mind the fact that we have the same name) was dating someone and had to decide whether to get married or serve a mission. They struggled as they let me make my own choices, even if they didn't agree. In the end, I made the right choice. I guess this book and story really came to life for me...because a lot of it is my life in one degree or another. The only thing I couldn't relate to though, is the husband. He's pretty near to perfect and I'm not sure if any husband is THAT supporting and loving. I wish...Anyway, I enjoyed reading the book and I really loved the resolution at the end-- the dawn after the darkness. Thanks for the ride, Rebecca.
Posted by AZ SMITHS at 9:24 PM 1 comment: 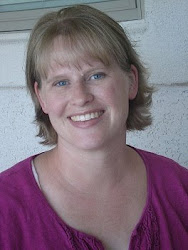